In an eukaryot organism – such as a human, a dog, a bee, a rosebush or toadstool – DNA is present in every cell, in structures called chromosomes. The information carried by DNA is held in sequence pieces which are called genes.

The set of chromosomes in a cell makes up its genome. The human genome is comprised of roughly 3 billion base pairs of DNA arranged into 46 chromosomes. In eukaryote organisms, DNA usually occurs as linear chromosomes. (Prokaryotes on the other hand have circular chromosomes.)

During sexual reproduction, DNA is passed down to the offspring from the parents. A human beeing have DNA inherited from the mother and the father. 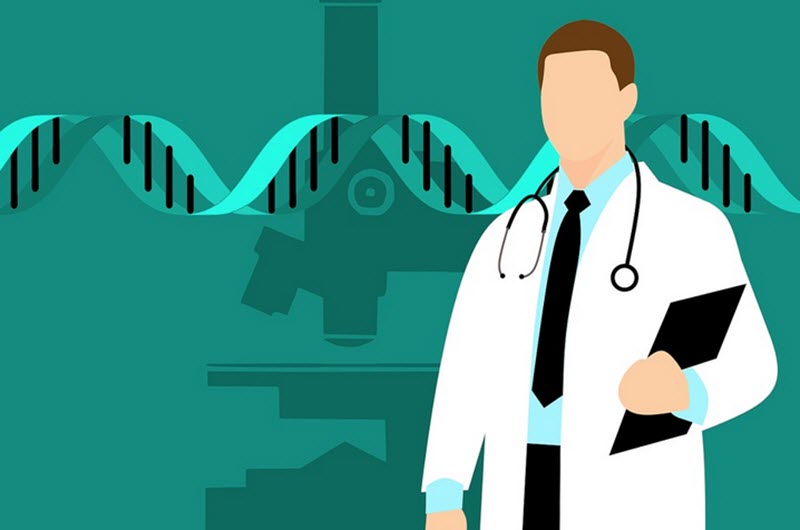 In eukaryote DNA (e.g. human DNA), chemical substances are linked together and each piece of DNA have two long strands which are joined together. The shape of DNA is similar to a ladder that has been twisted into a spiral.

As mentioned above, the “rungs of the ladder” in the DNA spiral are comprised of bases.

There are four different bases in DNA:

These bases are repated in different orders over and over again in each strand of DNA. Their order is very important, as it gives the cell information about which proteins to make.

In human DNA, there is roughly 3 billion pairs of these bases.

Important early milestones for our understanding of DNA

DNA is isolated for the first time in 1869

DNA was first isolated in 1869 by the Swiss physician Friedrich Miescher, who noticed a microscopic substance in the pus of discarded surgical bandages. As his finding was located within the nuclei of cells, he called it “nuclein”.

The discovery of nuclei acid and the five primary nucleobases

Yeast nucleic acid – what we today know as RNA

In 1909, Phebus Leven idenfied the base, sugar and phosphate nucleotide unit of the RNA. Back then, it was still known as yeast nucleic acid.

Levene is the scientists who suggested that thymus nucleic acid consisted of a string a four nucleotide units linked together by the phosphate groups.

In 1927, Nikolai Koltsov suggested that inherited traits were inherited through a giant hereditary molecule comprised of two mirror strands, and that it would replicate using each strand as a template.

In 1933, Jean Brachet suggested that DNA (“thymus nucleic acid”) is located in the cell nucleus while RNA (“yeast nucleic acid”) is found only in the cytoplasm. He came to this conclusion while studying eggs from virgin sea urchins.

This was groundbreaking, because before this, “yeast nucleic acid” were thought to only exist in plants and “thymus nucleic acid” only in animals.

The structure of DNA is regular

In 1937, William Astbury managed to use x-ray technology to show the regular structure of DNA. His work relied on x-ray diffraction patterns.

The 1940s and 1950s were decades when a lot of seminal research regarding DNA took place and scientists gave us a much deepend understanding of what DNA is and how it works. Oswald Avery, Colin MacLeod and Maclyn McCarty worked together to show DNA as the transforming principle in the early 1940s, and Erwin Chargaff showed how, in DNA, the amount of guanine is equal to the amount of cytosine, and the adenine exist in the same amount as the thymine.

The link between DNA and inheritaded traits was confirmed by Alfred Hershey and Martha Chase in 1952, through their experimentation on enterobacteria. That same year, graduate student Raymond Gosling – supervised by Rosalind Franklin – took an x-ray diffraction image that would later help Francis Crick and James Watson to understand the true helical structure of the DNA molecule. (Prior to this, they had used incorrect models where the chains where inside and the bases pointed outwards.)

Crick and Watson published a paper in “Nature” in 1953 which laid the groundwork for future research regarding the structure and functions of the DNA. In 1962, Watson, Crick and Wilkins (Franklin had died in 1958) shared the Nobel Prize in Physiology or Medicine for their “discoveries concerning the molecular structure of nucleic acids and its significance for information transfer in living material”.